In this issue:
Wilson Harris takes on art, the universe, and everything; a biography of Rastafarian pioneer Leonard Howell; Curdella Forbes tells a simple story; Little Lion learns a lesson; plus West Indian writers talk about their art
Culture stays close to their roots; Barbados hosts world-class jazz; Andre Tanker lives on in his music; 3Canal goes after joy for Carnival 2004; plus Dean Fraser's playlist and our rhythm roundup
Jamaica-born actress Yvonne Brewster on black British theatre and working with C.L.R. James; as told to Nazma Muller
Trinidad Carnival combines bacchanalian celebration with spontaneous street theatre, in an atmosphere of fantasy and “freeness”. Above all, it is the spectacle of the masquerade- thousands of costumed revellers transforming Port of Spain into a visual fantasia. The decades after the Second World War were a golden age of Carnival costume design. Dylan Kerrigan and Nicholas Laughlin profile the major designers of this era, the individuals whose imagination, craft, and passion created legends
Harold Saldenah 1925 - 1985: Sally's historical extravaganzas were famed for their scrupulous detail
George Bailey, 1935 - 1970: "Sir George" won the lasting affection of ordinary spectators as no designer has before or since
Gayelle returns to the airwaves; Calypso Dreams captures the sound of a generation; and revisit Carnival 2003 on DVD
Ken Morris, 1924 - 1992: This master craftsman transformed a traditional Carnival technique into high art
Cito Velazquez, born 1929: His wire-bending expertise made the most intricate, elaborate designs possible
Irvin McWilliams, born 1920: "Mac" celebrated the everyday life of Trinidad and Tobago, pioneering "indigenous mas"
"Diamond Jim" Harding and Jason Griffith: The kings of fancy sailor mas reigned over their surreal genre for 60 years
Edmond Hart and Lil Hart: The Hart's colourful creations demonstrated that Carnival above all is to be enjoyed
Carlisle Chang: A landmark artist, Chang designed bands unrivalled for the breadth of their themes and meticulousness of their execution
Stephen Derek: An apprentice of the great George Bailey, Derek has taken Trinidad Carnival around the world
A year's worth of art; and Bill Grace creates monuments to optimism
Wayne Berkeley: Bridging his consummate professionalism to Carnival design, Berkeley is known as a master decorater
Peter Minshall: Life, death, rebirth: Minshall uses the medium of mas to make statements more profound than anyone previously thought possible
Epilogue & Credits
At home in Trinidad, Caroline Taylor’s multi-ethnic identity is no mystery; the rest of the world is a totally different melting-pot. Originally published in 2004, this Beat classic was reproduced in the September/October 2018 issue
Pelau = rice + meat + pigeon peas, right? Not if Anu Lakhan has her way. A plea for pea-free pelau
For 40 years, Frank Collymore, writer and editor of the magazine Bim, was a major figure in West Indian letters... Meet the man behind the reputation.
When the music stops and the costumes are put away, there’s still a multitude of things to keep Carnival visitors here in Trinidad a few days or weeks
Mashramani, Guyana’s version of Carnival, is a celebration of national independence and community spirit
Sir George Alleyne takes charge at UWI; Nadz brings rap back to Jamaica; Darrel Brown is the man to beat; Janine Antoni makes high-wire art; Daniel Prendergast does good science; and Nelly Stharre finds her Soul Country
O'Leo LoKai shares a few ways to attract love
The Dragon Can’t Dance explores the contradictions between the power and beauty of Trinidad’s Carnival and the social and personal issues hiding behind the costumes. James Ferguson argues that Earl Lovelace’s novel comes closer than any other literary work to the truth of the mas’ 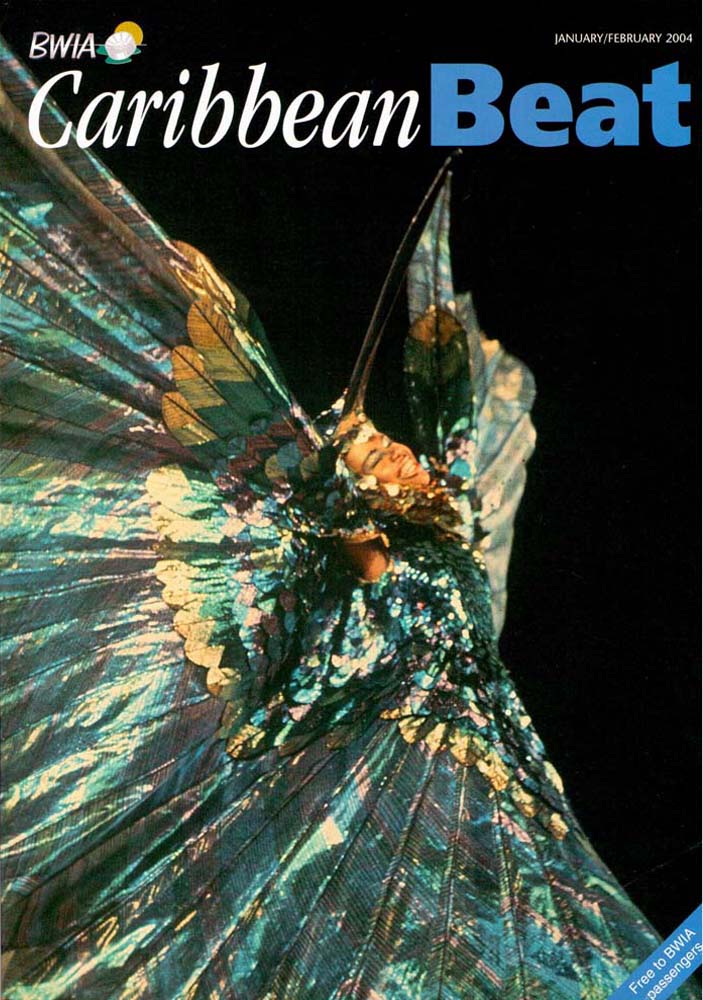