Make the most of March and April, even during the time of COVID-19 — from Phagwah in Guyana to Carnival in Sint Maarten

A kaleidoscope of hues, pulsating tassa drums, and the melodies of chowtals emanate from homes and Hindu temples throughout Guyana, Suriname, and Trinidad and Tobago during Phagwah. Also known as Holi (falling on 18 March this year), this festival of colour signifies the triumph of good over evil and a bountiful harvest. In Guyana, Phagwah is a national holiday and a jubilant opportunity for cultural intertwining, as everyone participates. A festive spirit fills the air, with sprinkled abeer — a pink or purple dye — staining once-white garments. Due to the ongoing COVID-19 pandemic, 2022 Phagwah celebrations may be limited, but renewed goodwill and unity are abundant. 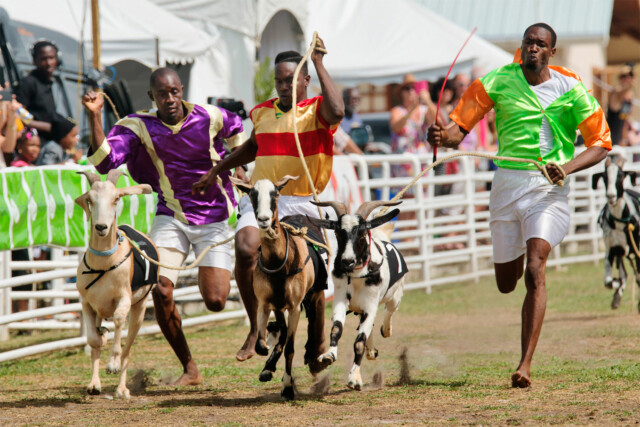 Here in the Caribbean, it’s not just Olympic athletes who like to go fast. And in the race to victory, the competitors can include some unusual creatures. For instance, each year at Easter time, Tobago becomes the goat and crab racing capital of the world. Shelly-Ann Inniss learns more

To the uninitiated, a barefoot “jockey” racing alongside a goat might be an unusual sight. But in Tobago’s villages of Buccoo and Mount Pleasant, it is one of the main attractions on the Tuesday after Easter. Almost one century ago, Barbadian migrant Samuel Callender started the Buccoo Goat Race to entertain the local villagers, since horse racing was the main entertainment for the upper class. (Goat racing was once a popular attraction during “ole time” Crop Over festivities in his homeland Barbados.) After that, Easter Monday in Tobago was dedicated to horse racing, while Easter Tuesday (19 April this year) was declared for goat and crab races.

There’s no guarantee that a bubbling pot with an enticing curry aroma is not on anyone’s mind during the events, but what’s certain is that stamina, speed, and strength dominate the tracks. Similar to preparing horses for competitive racing, a lot of work goes into getting the goats — typically billy goats — ready. At least two months prior to race day, they get into the thick of training. They swim to build muscle, walk, and then run, with the aim of running ahead of their trainers. In fact, the human jockeys must be faster than their charges, because if a goat should outrun his jockey, that’s grounds for disqualification.

Come race day, Buccoo is abuzz with activity. The goats and jockeys parade through the village and commentators identify which goats are potential frontrunners. Following a cultural programme and brief formal ceremony, it’s showtime. Decorated in bold colourful numbers and wearing leashes, the goats wait behind the starting gate. The heat is on as they dash ahead of their jockeys along the 110-metre track to the delight of families cheering them on.

While the goat race gets hearts pounding, the accompanying crab race — competitors are often hermit crabs — takes the excitement to different level, as the crustaceans scuttle haphazardly towards the finish line with some coaxing from their jockeys.

Crab racing is also popular in parts of the Bahamas and Jamaica, while goat racing occurs internationally in places as far afield as Kenya and Uganda, the United States, Britain, and Australia.

A huge street party ends Easter Tuesday in Tobago, but if you missed the goat and crab races — or want to experience them once more — they usually happen again at the Tobago Heritage Festival in July. 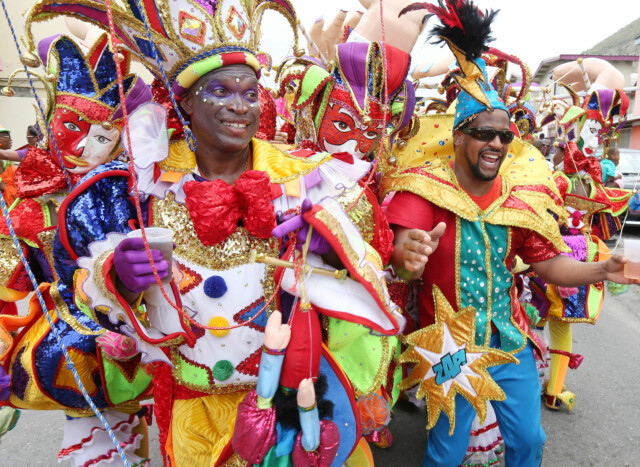 After two years of cooling their heels during the COVID-19 pandemic — with festivals across the Caribbean cancelled or downsized — fete-goers and Carnival lovers can finally show off their best moves at the 2022 Sint Maarten Carnival, running from 16 April to 3 May. Finally, here’s a chance to connect your body with music’s harmonies, for a whole nineteen days.

The energy, passion, and community spirit of Carnival are unmistakable. Thousands of visitors join in the celebrations, which run day and night, at venues across the Dutch side of this idyllic island. The centre of the action is Philipsburg’s Carnival Village, an open-air venue for concerts and other major events, and the main stage for masqueraders.

There’s a plethora of fetes and lively music to choose from, including a steelpan explosion. The schedule features eleven locally themed events, six international shows, and three parades. Staples include options for every musical taste: the Night of the Hit Makers, Caribbean Flag Fest, the One Love Reggae Concert, Bacchanal Sunday, Noche Latina, and Soulful Company. And you can top it all off with delicious Caribbean food from the friendly vendors in the Carnival Village, to keep you fuelled throughout the season.

Due to COVID-19 protocols, a few events — like J’Ouvert — are still on hiatus this year. This just might give masqueraders extra energy for the item ranked number one on any Carnival’s must-do list. For 2022, the Children’s and Grand Carnival Parades will be combined into one big spectacular street parade: a colourful procession of dancers, floats, bikinis, feathers, and elaborate costumes. Come and soak up the effervescent vibes as you create new memories — and forget the COVID blues.

Caribbean poets to the world 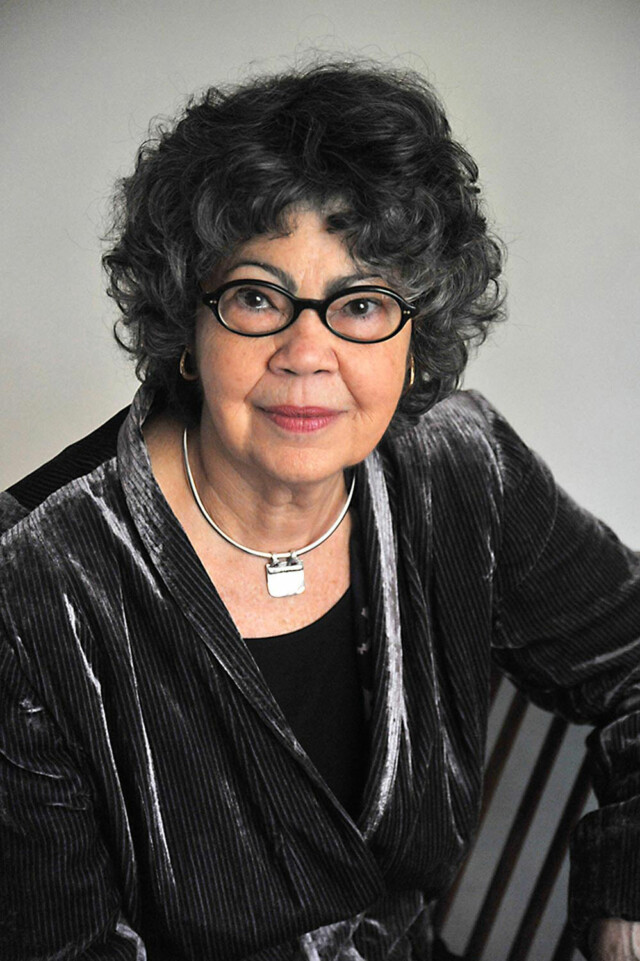 For decades, Caribbean poets have transformed the registers of our existence into daring, passionate verse. You probably know the work of St Lucian Nobel laureate Derek Walcott, Jamaican Louise Bennett-Coverley, and Barbadian Kamau Brathwaite — now, as we mark World Poetry Day on 21 March, here are five extraordinary contemporary Caribbean poets to add to your reading list

Nobel laureate Derek Walcott touted John Robert Lee as a “scrupulous” poet. Hailing from St Lucia — a paradise for poets and the backdrop for much of both writers’ work — Lee has nurtured a dedication to poetry for over four decades, and his poems, characterised by his Christian faith, have been collected in several books — most recently Pierrot — plus international anthologies and periodicals. To borrow his own poetic words, crafted in City Remembrances, Lee is “beyond talent, beyond award, beyond tomorrow’s tomorrow.”

Jamaica-born Shara McCallum comes from a nation with literary heavyweights, known to profoundly inscribe their talent in readers’ minds. The appointed Penn State University Laureate for 2021–2022 and author of six poetry books, McCallum often examines the paradoxes and complexities of her subjects with penetrating insight. Her most recent book, No Ruined Stone, is “lyrical, wrestling with colonialism, racism, and the knotted legacy of slavery.”

A Guyanese poet based in the United Kingdom, Grace Nichols was recently awarded the 2021 Queen’s Gold Medal for Poetry — just the latest of her honours and accolades. She views poetry as a “way into those parts of yourself that are beyond words.” Mythology and history, dreams and landscape are all explored in her illustrious work. Her collections are for all ages, and her latest release, Passport to Here and There, was a UK Poetry Book Society Special Commendation.

Literary talent reverberates throughout Trinidad and Tobago, a hotbed of creative expression. Shivanee Ramlochan’s poetry is generally a work of witness, touching difficult topics or deep human experiences unapologetically and without compromise. Simply put, she occupies perspectives of resistance which investigate what happens when you push the envelope too far. Lean into her debut book Everyone Knows I’m a Haunting, and look out for her second book, Unkillable (due in 2023), a nonfiction narrative on Indo-Caribbean women’s disobedience.

If you have preconceived notions about how poetry should sound or be crafted, Olive Senior — Jamaica’s current poet laureate — makes you think twice. She effortlessly unearths history, tradition, and culture with impeccable artistry of language. This internationally acclaimed literary luminary is also a famed writer of fiction and non-fiction, and her newest book, Hurricane Watch, brings new poems together with favourites from her collected past volumes. These poems are described as “delicate, formally playful, and always finely observed, whether responding to Jamaican birdlife, the larger natural world, or the traces of a complicated historical inheritance.”

To see and hear even more extraordinary Caribbean writers, tune into the 2022 NGC Bocas Lit Fest —Trinidad and Tobago’s annual literary festival — running from 28 April to 1 May, once again in a virtual format. All events are free, and streamed via YouTube, Facebook, and the festival website, www.bocaslitfest.com 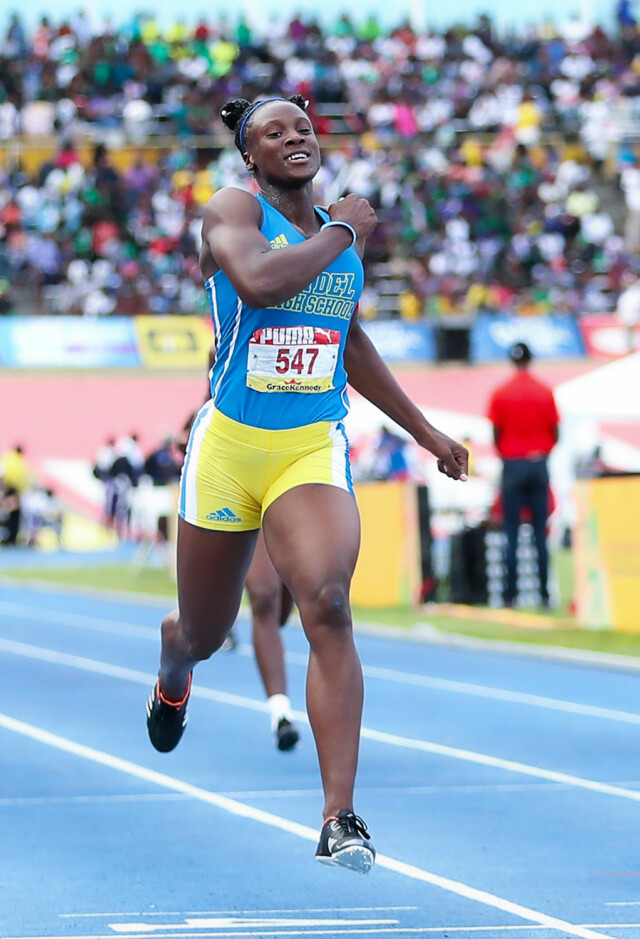 After Jamaica’s historic clean sweep in the Women’s 100m race at the Tokyo 2020 Olympics, expectations are running even higher at Jamaica’s annual ISSA/Grace Kennedy Boys and Girls Athletics Championships — better known as Champs — from 5 to 9 April. Multiple-award-winning sports journalist and sports editor Andre Lowe shares his thoughts on past Champs athletes with promising international futures

Did you participate in Champs while growing up in Jamaica?

I didn’t participate as an athlete, but I’ve covered it for many years. In fact, after covering four Olympic Games and five World Championships, I can safely say that nothing compares to experiencing the Boys and Girls Athletics Championships in Jamaica on a Saturday evening, with youngsters breaking record after record, in some cases putting down times that are the national records for some countries, in front of thirty thousand screaming spectators. It’s electric!

Shericka Jackson was a star athlete for Vere Technical during her time competing at Champs, winning several medals and building a reputation as one of Jamaica’s most talented youngsters. Of course she has since gone on to replicate that success on the international stage, with Olympic and World Championships medals in the 100m and 400m. The path was much different for Shelly-Ann Fraser-Pryce and Elaine Thompson Herah, who were definitely below the radar during their days competing at Champs, and really didn’t stand out to many while they were in high school. Of course they have both matriculated into becoming two of the greatest sprinters of all time.

High school loyalties are strong at Champs. Which schools have legacy athletes, and do these schools also rank high during the competition?

Traditionally, there are quite a few teams that have developed a strong history of success at Champs. Over the years the likes of Kingston College, Calabar High, Jamaica College, Vere Technical, St Jago High, Holmwood Technical, and Edwin Allen High have been the most consistent winners of the respective girls’ and boys’ titles. However, and particularly in more recent times, Jamaica’s wealth of talent in athletics is witnessed here, with a lot of non-traditional track and field heavyweights developing top athletes and coaches, who have not only had success at Champs, but have gone on to win medals and impress at the international youth and senior levels.

Which current and recent Champs athletes should we look out for on the international stage?

Seventeen-year-old Tina Clayton is one of the hottest properties in international youth athletics. The Edwin Allen High School student made headlines when she won the world Under-20 100m title in 11.09 seconds last year, and many expect her to go on to achieve great things in the sport.

Ashanti Moore is a former star athlete at Hydel High School. At twenty-one years old, she is now a pro, and is expected to follow in the strides of the great Jamaican women sprinters before her. Just last year she ran 11.10 in the 100m, and is expected to continue her development and establish herself on the senior international stage soon.

Former Edwin Allen flag-bearer Kevona Davis is a twenty-year-old former World Under-18 100m bronze medal winner. Currently a student at the University of Texas, she has a personal best of 11.16 in the 100m and 22.72 in the 200m. She is also regarded as one of the island’s brightest prospects at the senior level.

As told to Shelly-Ann Inniss

Next Story
A thirty-year-quiz | Did you even know