February brings T&T’s annual Carnival, and 2021 — with the physical festival cancelled due to the COVID-19 pandemic — is a year to reminisce about Carnivals past. We asked three photographers — Jason C. Audain, Maria Nunes, and Shaun Rambaran — to choose one favourite image from their respective Carnival archives, and tell us the story behind it. As it turns out, the photos they chose all had something in common

Mas, the performance artform at the heart of Trinidad and Tobago Carnival, is essentially fleeting: after months of preparation and anticipation, the moment comes with all its energy and passion, colour and fire, and then is gone, leaving traces in our memory — and in photographs. “As the years pass, photographs become our memories of Carnival”: so we wrote back in the January/February 2007 issue of Caribbean Beat, where we asked six noted Carnival photographers to each select a specially meaningful image from their respective archives, and tell us its story. Fourteen years later, in a year when the COVID-19 pandemic means the Carnival season is imbued with nostalgia, we asked three more photographers to do the same thing. Independent of each other, and entirely by coincidence, all three — Jason C. Audain, Maria Nunes, and Shaun Rambaran — chose photographs of moko jumbies, the traditional mas character derived from West Africa which has enjoyed a major revival in the past decade. There’s a story in that, too. 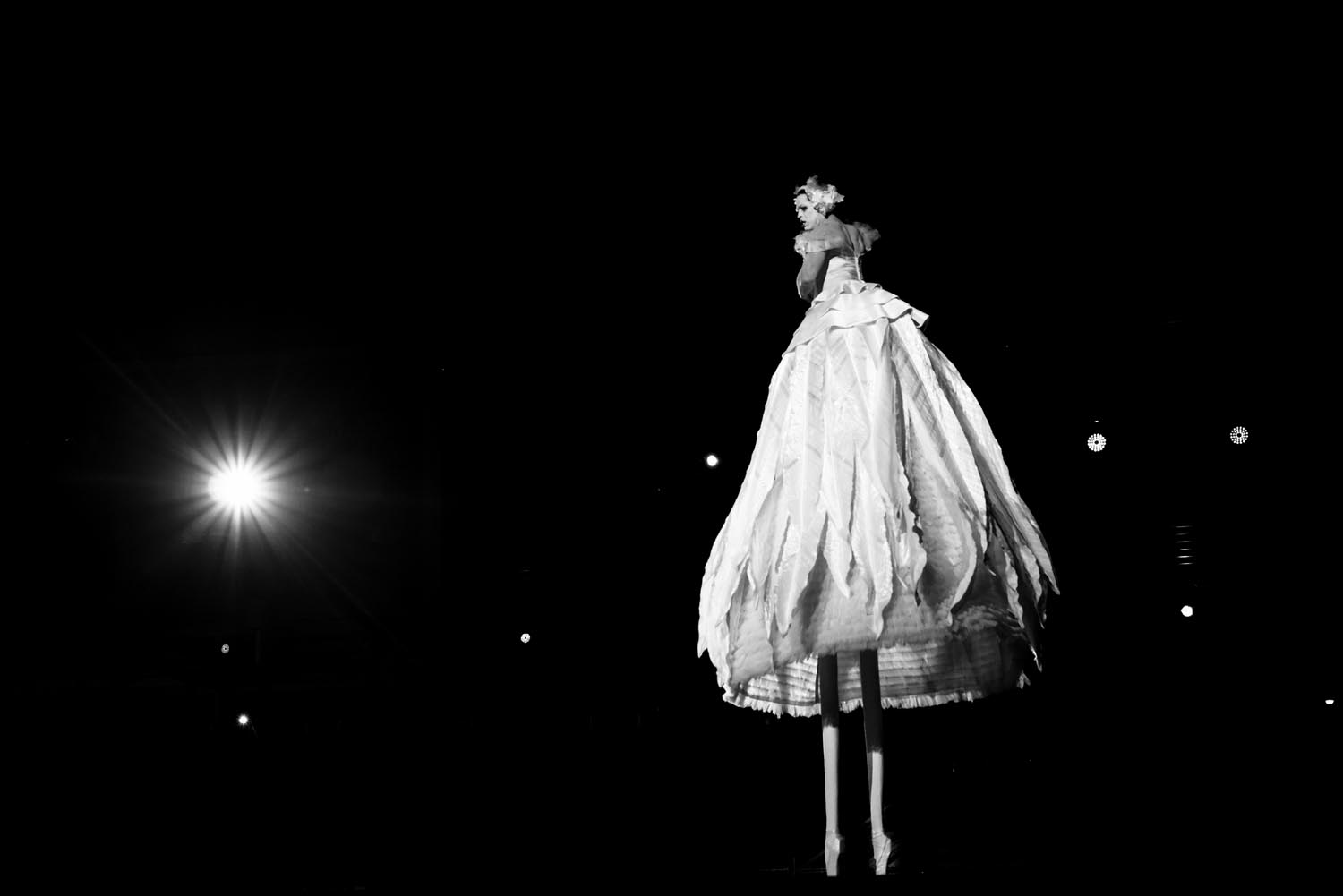 “A photo is a story”

2016 was my first time photographing the Carnival Kings and Queens competition at the Savannah. I wouldn’t have gotten the photo if it wasn’t for Maria Nunes. I was taking pictures all night, and right before I left I saw Maria and she said, “You can’t leave, The Dying Swan is coming on.” I told her my memory card was full, I couldn’t take any more photos. She pulled out a card and said, “Use that — whenever we meet up again you can give it back.” That’s how I ended up taking photos of Minshall’s Dying Swan [portrayed by Jha-whan Thomas].

Almost everything that night was magical to me, because I’d never experienced Kings and Queens before. A friend of mine asked me to photograph the competition, and that’s how I ended up there that year. Something about the Swan was just different. I was snapping pictures like a madman. I don’t know how it didn’t win the competition — the performance, the execution.

Trinidad Carnival is art. To me, traditional mas has an artistic aspect. Every costume that I’ve seen is not just a costume, it’s art. It’s an exhibition by itself. People see the costume, the end product, but they don’t see the process behind it. It’s just like a photo, people don’t see the effort in capturing the image.

Photographing mas is a whole waiting process. Most people are just snapping, snapping, snapping. I hold the camera to my eye and wait till I see something special. I have shots in my head that I plan on capturing. I see the photo before it happens.

For me, a photo is a story. If you can’t tell a story in the photo, it makes no sense. If there’s no story, it’s just a pretty snapshot, in my opinion. 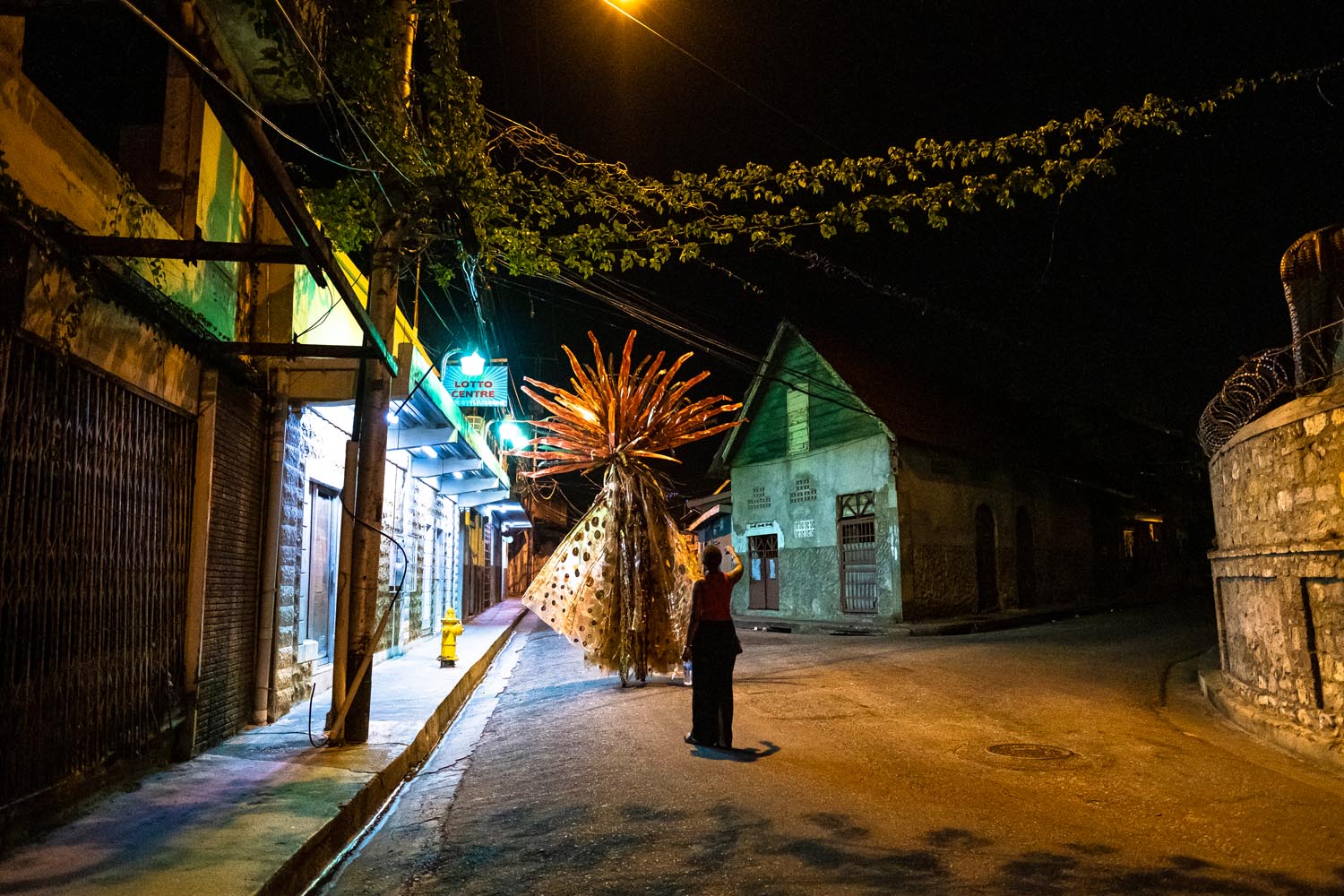 This photo was taken on Observatory Street in Belmont, east Port of Spain, at about 5 am on Carnival Friday morning in 2019. Alan Vaughan, the designer of the mas band Moko Somõkõw, who is portraying The Sun Rises and Overwhelms the Sinnerman, had said to me that he was going to walk from Erthig Road to the Kambule re-enactment on Piccadilly. I thought it would be very special to photograph him moving through the quiet streets. I admired that Alan had delved into the profound literary work of Wilson Harris’s novel Palace of the Peacock to inspire Moko Somõkõw’s presentation that year. I wanted to document and witness his quiet commitment.

One of the biggest challenges for a moko jumbie out in the street is navigating the constant crisscross of telephone wires and other cables that run from lamppost to lamppost. There was an added challenge with this costume because of the height of the headpiece, so Alan needed help from his colleague Danielle to guide him safely as he walked. The streets were so desolate at that hour. There was a real sense of the quiet before the unleashing of all the Carnival energies. The walk felt like a kind of meditation. It was beautiful to experience the majestic presence of The Sun Rises Over the Sinnerman literally as the sun emerging out of the darkness of the night. It was so quiet you could hear the swoosh of the fabric in the costume as he walked. I can remember that sound.

I took a lot of photographs that morning. It was very hard to choose one to share. In the end, I chose this one because of all the details in the surroundings — the vine on the wires, the old stone wall with barbed wire on top, the sense that the street was full of history, and most especially because of the gesture of Danielle’s arm guiding Alan.

For me, this image is a reminder of the deeply spiritual and ritual core of Carnival. So much of the imagery of Carnival we see is thick with the energy of lots of people bathed in bright sunshine. This photo portrays a very real aspect of our Carnival that is often unseen, unnoticed.

That morning was the first time I used a mirrorless camera. It was all a bit of an experiment and learning curve for me to see if I could get the results I’d grown accustomed to with my DSLR. There was no flash involved. Generally speaking, I walk with at least two cameras and multiple lenses and a flash when I’m out in the street for Carnival. You have to be prepared for any eventuality. So much is happening all around you. It’s constantly making split-second decisions.

What I’m striving for in my Carnival photography is simply to be present in a way that doesn’t get in the way — to not get too involved in orchestrating the moment. The photographs I love the most are the ones when the person is lost in their mas and not aware of the camera. Sometimes magic happens. 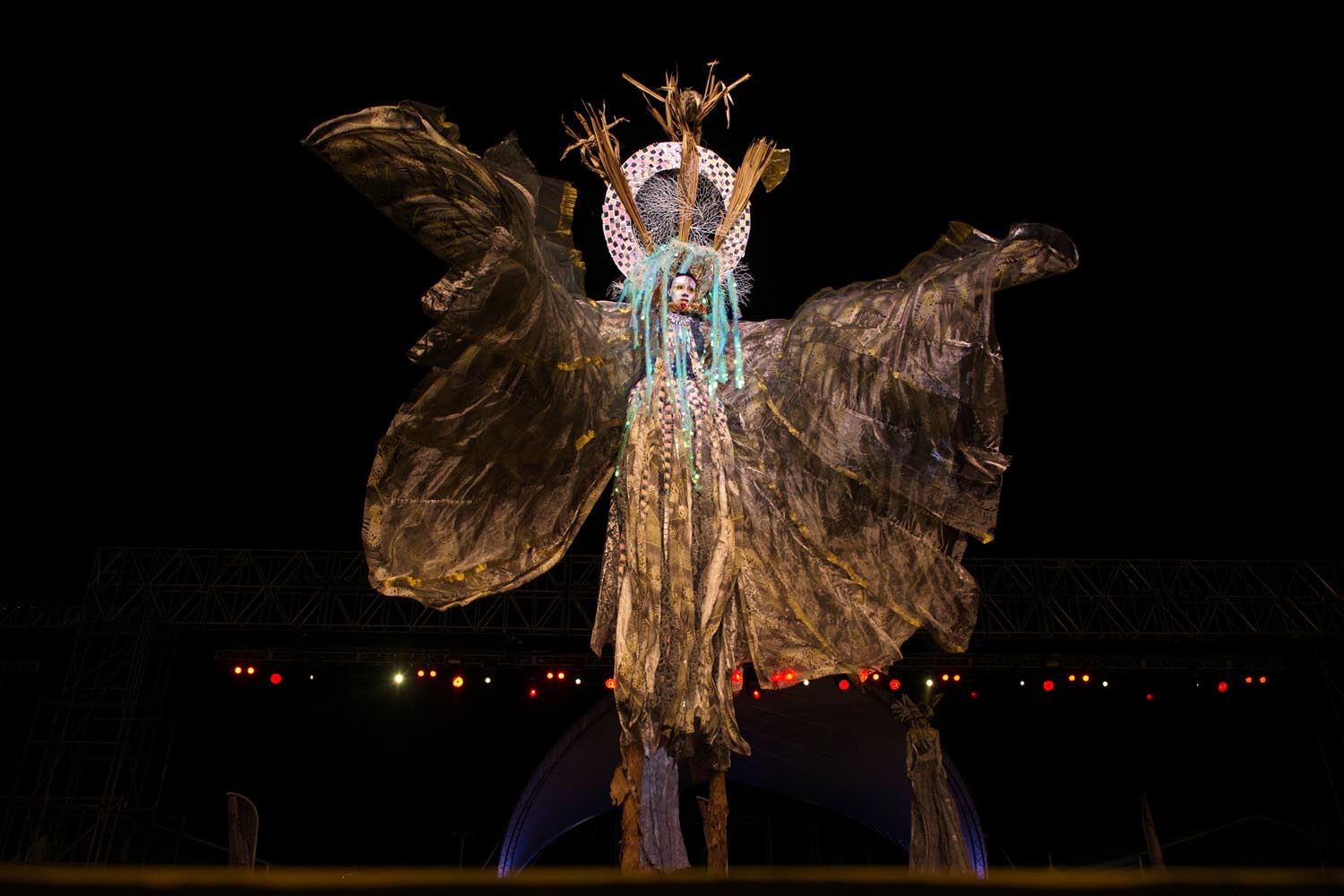 “It was a real gift”

He doesn’t quite know how it happened, says Shaun Rambaran of photographing Shynel Brizan’s moko jumbie queen Mariella, the Shadow of Consciousness

What a year was 2019. By the time I took this photo, I’d been photographing stick-walking for dozens of months — beginning with the 1000mokos project out of Alice Yard, then the birth of Alan Vaughn’s band Moko Somõkõw in 2018. How ignorant I was, not knowing those were only the preludes to a coming crescendo.

For Carnival 2019, the surreal theatre of Wilson Harris’s novel Palace of the Peacock was portrayed through the genius of Alan Vaughn by Moko Somõkõw’s moko jumbies. I’d been photographing the band behind the scenes, witnessing the humble beginnings of each costume, and slowly coming to know the main performers: Tekel “Salti” Sylvan, Russell “Rusty” Grant, and Shynel Brizan, the band’s young queen, who all turned their hands to the making of their costumes.

Shynel Brizan’s Mariella, the Shadow of Consciousness was an enormous mas — so large that only small segments of her costume could be seen at once inside the band’s mas camp on Erthig Road in Belmont.

Eventually the day came for her debut, at the Prelims of the 2019 Carnival Queens competition. To secure a favourable place in the photographers’ zone, I didn’t spend that evening with the band, but instead went directly to the Savannah Grand Stand, using my media pass for access. As I waited for our queen, I watched the other competitors cross the stage. They were loud, bright, colourful, all fitfully jamming to the crashing cacophony of thunderous soca.

Then the brightness died. The lights went out. The Savannah went silent. The air was cold. Quiet. Standing with my camera aimed into the darkness, I could sense the audience’s anticipation all around me.

Out of the darkness, ethereal African drumming arose. As the rhythms took hold, pale blue light revealed Mariella, as she rapturously glided on stage. I slipped into a trance. My fingers worked on their own, changing settings to allow for the darker stage, timing Shynel’s movements to trigger the shutter, as my mind drifted deeper and deeper into the spell she cast. I felt my pores raise and my hairs standing in awe of this first-ever moment of seeing the full costume, all put together, drifting across my view.

As Shynel floated off stage, I awoke and found myself kneeling in the pit before the place she’d once stood, several metres away from where I began. I looked down and discovered this photograph sitting inside my camera, not quite knowing how it happened. It was a real gift.

What did this moment say to me about Trinbago Carnival? It demonstrated the power of art to probe deeply into one’s soul. With so much of Carnival today so commercial and sterilised, it’s heartening to know that true Art can still exist. And, moreso, that it can be justly recognised. Moko Somõkõw was ecstatic one week later when Shynel Brizan was officially crowned the 2019 Carnival Queen.