In this issue:
What's fun and happening in the Caribbean
In the Caribbean, no holiday is complete without mountains of food
Carlos Acosta brings Cuban rhythm to ballet, Queen Ivena sings her way into calypso history, Herralal Rampartap proves his fans right, Pat Cumper makes a dramatic breakthrough, George Bovell swims like a shark, and D'Mello tells her Best Love Story
The city's name summons images of crumbling colonial palaces, forts, and churches; of 1920s art deco decadence; of 1950s nightclubs, 1960s revolutionary politics, and the 21st century tourism trade. Havana is all of these simultaneously, a place of contradictions and ironies, never settling down to visitor's expectations. Photographer Sean Drakes searches for the spirit of Cuba's capital in its unmistakable cityscape. With an introduction by writer Claudia Lightfoot, an honorary habanera
Ray Holman was just 17 when he composed and arranged his first tune for the Panorama steelband competition in 1961. It was the start of a 40-year steelband career with few equals. Lilian Sten tells the story of Trinidad's legendary pan arranger, from his first encounters with the instrument in 1950s Woodbrook to his latest international successes
Since the publication of her first novel, Breath, Eyes, Memory, in 1994, Edwidge Danticat has been hailed as “the voice of the Haitian-American experience". Her memories of Haiti, the homeland she left when she was 12, and her compulsion to tell the painful stories of her people, are the forces behind her quiet yet unflinching fiction. Mariel Brown charts Danticat's ongoing journey between two worlds, and discovers the tragic history of the Haitian diaspora
Many visitors to St Lucia never make it past the beach — and who can blame them? But Mark Lyndersay is determined to explore the rest of the island’s charms, on his own schedule and at his own pace. He takes off on a road trip round St Lucia, from Castries in the north to Vieux Fort in the south, and savours the pleasure of going his own way
Painter Rex Dixon grew up in grey, post-war London, and taught for years in strife-torn Belfast, but in 1985 a series of lucky events brought him to the Caribbean. First in Jamaica, and more recently in Trinidad, he has absorbed images and ideas from the everyday life of the islands into his idiosyncratic abstract expression of style. Bruce Paddington encounters Dixon's richly puzzling paintings and investigates the role of serendipity in his life and work
It’s not the average tourist’s idea of fun, but Simon Lee loves the challenge of a good volcano
Garry Steckles reminds us that hip-hop, the genre that’s taken over the world of music, started right here in the Caribbean
Barbados-born novelist Austin Clarke on the vicissitudes of sudden literary celebrity; as told to Vaneisa Baksh
James Ferguson on Freida Cassin’s With Silent Tread, a bizarre gothic noir novel revealing fears of racial impurity in late 19th-century Antigua
BWIA has just introduced three new Latin American destinations: Cuba, Costa Rica and the Dominican Republic.
French Catholic ceremonies for honouring departed loved ones on All Souls’ Day survive on many Caribbean islands. 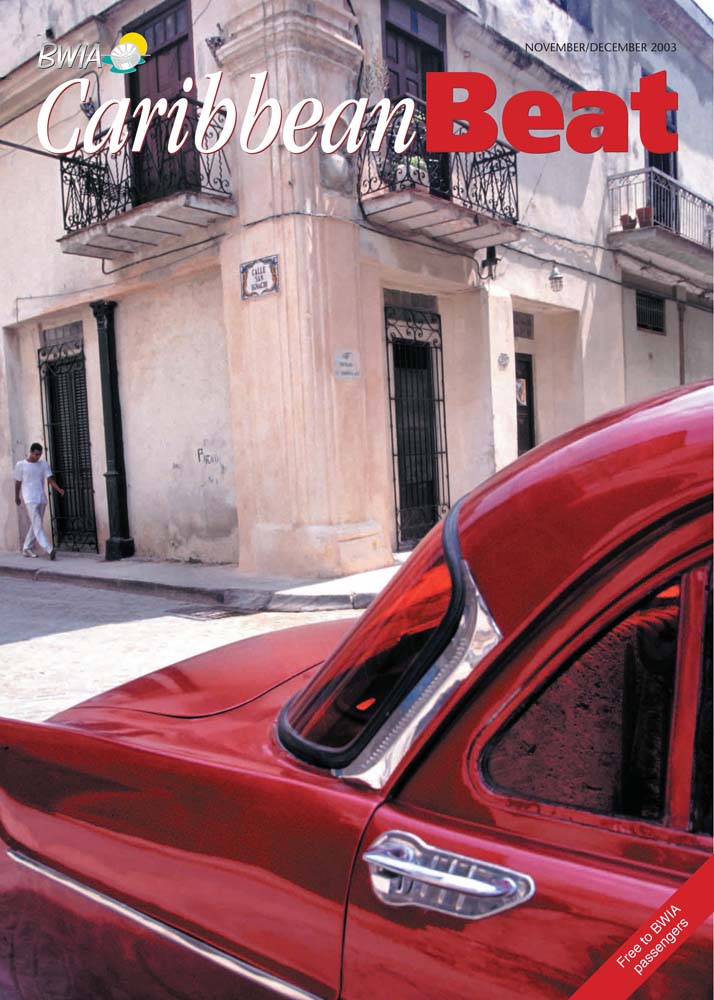